Happy Sunday! This week’s story is written in response to Fandango’s Flash Fiction Challenge #117. I kept conceiving this story in my head throughout the week, and I’m just glad that I had time to finish it enough to be shared by today’s story time. I’d love to hear your reactions to this Sci-Fi flash. 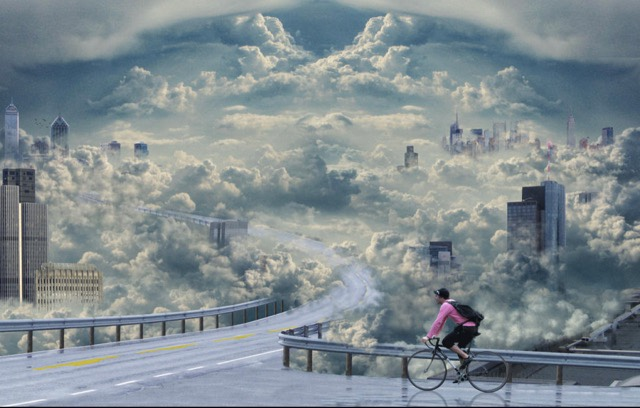 His three-hour interview was months ago. All checks were made and then duplicated, so Ben allowed them to strap him in for the final test, the scan for dream cleanliness.

He had heard horror stories from his colleagues losing their careers because of the odd figures appearing in their sleep, distortions that they knew nothing about. Monstrous ideas lurking under the beds of their dreams. No way to clean the mind, but Ben has been meditating for weeks on squeaky clean scenes all in the hopes of having a clear vision for his final exam. The high-paying job of his dreams, one clearance away.

Strapped into the machine, the needle went directly into his carotid artery. Ben was fast asleep within minutes. The two clinicians quickly began analyzing his dreams, knowing they had only minutes to reach a decision.

“Alright, the subject is on a bike, pink shirt–questionable, but seems to be alone. Black backpack of uncertain content on his back. Now, he’s reaching an intersection.”

The female clinician quickly typed keeping a log of these descriptions.

“My goodness is that bubbles?” Both technicians turned their attention to the screen above Ben.

“I think there’s a volcano back there….. This is a first.” The female clinician began typing a detailed description of the city submerged.

“My god, it’s bubbles,” the male clinical leaned in to take in the soapy scene.

“What kind of clean dream is this?” The female clinician giggled while speaking and pushed her glasses back up her pointy nose.

The bubbles spurted out from the mountaintop and covered over all the buildings, obscuring the city skyline. The clouds in this sky resembled soap bubbles.

“He’s not turning. Scared of the suds, you think?” The technician giggled, reaching up his hand to cut the machine,

“Wait,” his partner reached out, blocking his hand. Her status as lead clinician clear in her tone and gesture.

The bubbles dissolved revealing city buildings and streets. Within the city, multiple bank heists occurred, the robbers filling their pockets and cars with trash bags of green cash.

In many of the windows of the high rises, male and female prostitutes danced provocatively, took off their clothes and curled their fingers in a come-hither sign.

Suds evaporated around another building with men in pink shirts like Ben’s stood around in a circle passing a bong and placing bets. In the center, an illegal cockfight.

One of the pink shirts leaned out the building yelling, “Ben, Ben, come quick! You’re gonna miss it!”

And like that, the screen went blank. The female clinician began her careful typing as if each finger was passing judgement in a way that needed to be precise.

Ben regained consciousness, and the male technician went to work releasing his straps.

“Wha,… well, how did I do? Ben woke quickly, rubbed his wrists as if they’d been in cuffs.